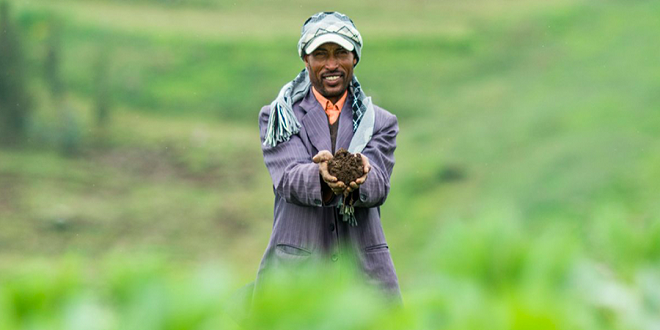 Although we tend to take it for granted, human society is principally possible only because the earth’s crust is dusted with a thin and often fragile layer of life-supporting material on which we can grow food: the soil

Two distinct parts of the soil the biotic and abiotic components function together to form a stable system. The biotic, or living (or that which was once alive) component is comprised largely of living plants, living organisms (macro and micro), and organic matter (plant and animal residues), which can be fresh, partially decomposed, or fully stabilized (humus). Soil’s abiotic component is made up of minerals, air and water.

By understanding the soil’s ecosystem, growers can harness and promote the biotic components with judicious additions of compost and green manures (cover crops worked into the soil) to create a healthy environment for plant growth, and thus virtually eliminate the need to apply purchased fertilizer. This can lower costs both out of pocket and environmental.

When you pick up a handful of soil, only half of that volume is solid material (minerals and organic matter). The other half should be pore space occupied by air (25%) and water (25%). Thus soil consists of four basic components.

Physical properties of soil are divided into texture and structure. Soil texture is a physical measurement of the percentage of sand, silt, and clay particles in a soil (as determined by grain size, with sandy soils being the largest and clay the smallest). It is a given, and cannot be altered (see more in Unit Soil Physical Properties).

Sandy soils usually feature low nutrient- and water-holding capacity and an associated lower organic matter content. On the plus side, sandy soils drain well, warm quickly, and allow early cultivation and planting in the spring. Clay soils are the opposite: they carry high levels of nutrients and water, but are often difficult to work. You can determine soil texture by a simple field feel test called ribboning, or have it measured with a lab soil test.

Soil structure refers to the arrangement of individual soil particles (sand, silt, clay) into aggregates or “clumps”; ideally, it takes the form of a granular or crumb structure, much like the cross section of a loaf of good whole grain bread. Such a structure features an amalgamation of small, intermediate, and large, stable aggregates. Some major contributors to stable aggregates and good soil structure are.

The addition of organic matter—fresh, as green manures, and stabilized, as finished compost. Organic matter is a feedstock for soil microorganisms that break down the organic materials and in the process exude mucilaginous glues and slimes that help bind soil particles into stable aggregates. Plant roots, both living and decomposed, also contribute “binding” substances to the system.

Timely and skilled cultivation techniques rough plowing or digging physically forces soil particle contacts, beginning the process of aggregation. Organic matter contributes to stabilizing the aggregates that form. Note: Too much cultivation (especially secondary cultivation, or pulverizing) damages soil structure, as does working a soil when it’s too wet. See details about cultivation in Garden and Field Tillage and Cultivation

How do you structure a volunteer program?

How to Use This Resource